I believe Jurassic Park to be one of the finest writings John has ever made.

The action cues of this movie are one of the most intriguing in film writing I have ever seen and they can be understood by studying the many principles previously discussed in the article Creation of Texture.

After a careful study of each chapter, practicing creating textures and making adjustments to them, now it is time to put our knowledge to test. We will do so by scoring one of the scenes of Jurassic Park I which originally has no music.

I particularly think the composer and director were wise to leave this scene without any music because, compared to what was previously scored and what follows this particular scene, it works as a strategical resting point.

Even though we are totally free to score the way we want, I believe true freedom is not a synonym of limitlessness. In this case, our limit will be to score this scene according to the music John Williams has written for Jurassic Park soundtrack so that our new score blends with the style of the original.

Since our focus is to score an action cue that preferably has no music, They’re Flocking This Way is a perfect fit for it.

THEY ARE FLOCKING THIS WAY - scene

John has used a lot of what I call savage rhythms in all his Jurassic Park scorings. In this case, the orchestration which consists of low string div. and low woods are more important than the rhythm itself.

The bassoons, which are playing the same notes in a different rhythm add a new dimension to the texture.

This is one resource that John has been using in many of his scorings. It consists of runs going up and down restlessly playing for a few bars in tremolo articulation. Usually they are played by the violas if the violins are already busy.

This is the chord which underlines the T-Rex killing the other dinosaur (1:37 video, bar 20 page 2 in the score). The sforzando articulation is of major importance here. The chord is classified as one of the many “Williams Harsh Chords” (Chapter 2).

John is known for his famous high wood runs which add color and movement to the texture.

His ability to choose the right colors and kinds of runs has made his music become one of the few that, today, is always taking advantage of the woodwind section.

Even though Jurassic Park is a tragic story of a park, John keeps the color and lightness of the movie, even in the slaughter action scenes, by using a lot of high runs.

2) After the fatal chord, a couple of very short runs take place just as a glimpse of the true nature of the movie. 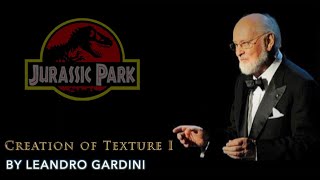